A GENOCIDE AGAINST SMOKERS.

IF YOU MUST SMOKE – ROLL YOUR OWN!

Have you noticed increased migraine-like headaches, nausea, a copper metallic taste in your mouth, dry coughing and  burning eyes?

This is not an effect of the tobacco, but a new cigarette glue that manufacturers are forced to use at the seam of the cigarette paper.  This glue is called ethylene vinyl acetate, better known as – CARPET GLUE!

These new “fire safe” cigarettes are made wit 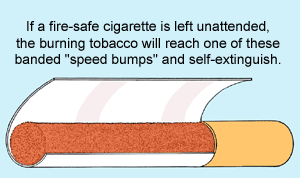 h 3 layers of paper, which requires triple the glues of past cigarettes. They contain what are referred to as ‘speed bumps’, (made from this highly toxic carpet glue) all the way down the shaft.

These are designed to reduce oxygen flow, so that the cigarette will quickly extinguish if nobody is inhaling it. In fact, this often puts the cigarette out too early, causing the smoker to re-ignite several times throughout a cigarette.

This is particularly ironic, because the ignition is the most dangerous part of smoking, in terms of fire safety and carcinogenic toxins.

In addition, it forces the smoker to puff more deeply, and more frequently than they otherwise would, while smoking a considerably more toxic cigarette.

A study by the Harvard School of Health revealed that tar, carbon monoxide, and naphthalene levels were higher in the new fire safe cigarettes. In fact, according to their study, every chemical, except nicotine, was higher in fire-safe cigarettes, encouraging smokers to inhale the toxins more deeply.

Symptoms of acute exposure include headache, nausea, vomiting, diarrhea, malaise, confusion, anemia, jaundice, convulsions, and coma. It can also cause neurological effects in infants. From these things, it is concluded that non-fire safe cigarettes are safer than their fire-safe counterparts…….and these are the effects of just one chemical.

Naphthalene is an insecticide and a bi-product of the coal tar industry –  It is also a core part of the new “safe” cigarettes!   Exposure to high amounts of naphthalene can result in irreversible damage to the eyes and liver, according to the E.P.A.   and on it goes etc…..

Deadly by design. You can identify cigarettes with this carpet glue by the letters FSC (fire safe cigarette) near the barcode or anywhere on the pack.

Hypnosis therapy – is a natural and powerful alternate healing modality.

Hypnosis is widely used to treat psychosomatic problems as a very effective therapy. Hypnotherapy has been proved to be very successful in cases of enhancing performance, willpower and confidence as well as treating depression and anxiety.

Modern hypnotism owes its origins to the Austrian physician Franz Anton Mesmer, from whose name the term ‘mesmerise’ is derived, who used a form of laying on of hands to bring about an altered state of consciousness in his patients. It was in 1960s, when all forms of alternative medicine began to be taken seriously, that hypnotherapy was revived as a healing tool.

Hypnosis is a form of deep relaxation which induces the “alpha” state in the brain. As has been scientifically proven, effective healing of both mind and body takes place in alpha state and during this state, the hypnotherapist gives positive suggestions to the brain and the brain starts executing these positive suggestions.

Researches have found that during a hypnotic session, the breathing rate and the heartbeat slows down, blood pressure drops and the production of stomach acid (gastric juice) is reduced. In addition to it, no stress hormones are released into the bloodstream. These scientific findings make it clear why hypnosis is an ideal tool to alleviate various problems. Scientists at Standford University of California, tested the brainwaves of the hypnotised subjects using EEG, an apparatus which records electrical activity of the brain.

In hypnosis, brain emits alpha waves, which denote “a mentally alert but physically relaxed state”. This contrasts strongly to the waves emitted when the subject is asleep, in which all the waves are completely relaxed representing “no conscious mental alertness”, hence, generally the concept in general people’s mind that hypnotic state is only sleep is proved wrong.

We all switch in and out of hypnosis several times in a day, quite naturally and automatically. A hypnotist helps you achieve a trance-like state on purpose rather than leaving it to chance. During hypnosis, a person directs his/her attention inwards. Even though you are aware of where you are and who is with you, you just connect with the positive suggestions the therapist is giving. The therapist only facilitates hypnosis, it is the subject who goes into hypnosis. This is why it is explained, “All hypnosis is self-hypnosis.”

In modern scientific world, hypnosis is being used as an effective healing therapy to cure psychosomatic problems. Many fears and phobias are treated through hypnosis and so far hypnotherapy is working wonders in the cases of depression and stress-related problems.

In facilitating hypnotherapy, I have been fortunate to acknowledge the amazing healing results.